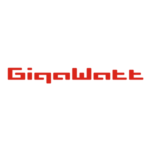 GIGAWATT PC-4 EVO+ is the flagship power conditioner model and is regarded as one of the best and most advanced constructions in the world.

This is a reference device, designed to provide power High-End class audio and video devices. PC-4 EVO+ is the quintessence of many years of research and development of an uncompromised power conditioner. The PC-4 EVO+ is not only a very effective protection against interference and power surges coming from the power line, but it guarantees a significant improvement of the quality of sound and displayed pictures of the devices connected to it. 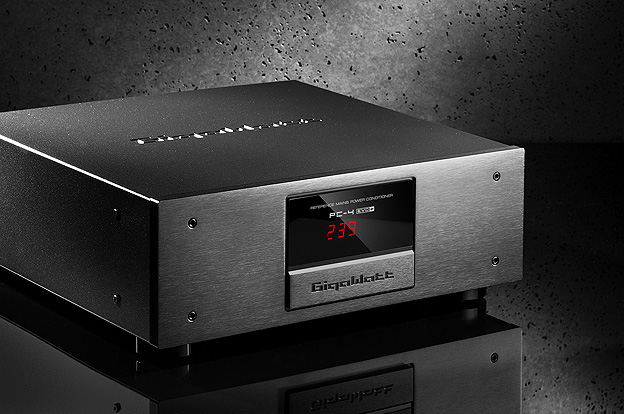 The main differences to the PC-3 SE EVO+:

All internal elements of the conditioner were enclosed in an ultra-rigid, non-magnetic aluminium chassis.

To reduce the vibration passed onto the conditioner, its chassis was additionally damped with a composite bitumen-polymer mat.

The whole is suspended on reference, anti-vibration feet equipped with an innovative solution – Rolling-Ball Isolation System. This is a design made from two parts (external and internal) made from solid aluminium, with two runs with balls in-between them. The role of the system is to minimize the number of contact points between the foot, and then the conditioner, with the shelf it is put on, which translates into a significant reduction of mechanical vibration, which negatively impacts the work of the internal elements of the conditioner degrading its sound. Another isolation element, on which the whole construction is supported, is the proprietary elastomer, 5mm thick.

The front panel of the conditioner is made from a thick slab of aviation-grade aluminium. Its surface is brushed, after precision milling, and then anodized black or silver.

The PC-4 EVO+ has twelve, high-quality proprietary power sockets GigaWatt, with large surface contacts. The brass contacts of the sockets were subdued to the process of technical silver plating without the usage of intermediate metals, like copper or nickel, which could introduce an unfavourable serial resistance and a voltage loss. The increased surface of the contacts and the thick layer of silver guarantee good contact with the plug pins. The sockets were additionally cryogenically modified and de-magnetized.

In the central part of the front, there is an LED display indicating the voltage of the input current. The precise voltmeter is very resistant to distortion and measurement errors caused by upper harmonics, at the same time not generating any interference, which would impair the quality of the power filtered by the conditioner.

The voltmeter display is red as standard but is available in green, blue or white on demand.

The conditioner is also equipped with an additional circuit signalling the wrong connection to the power grid. Its action is indicated by a red LED on the back of the unit, which signals the wrong polarity of the device or faulty grounding. 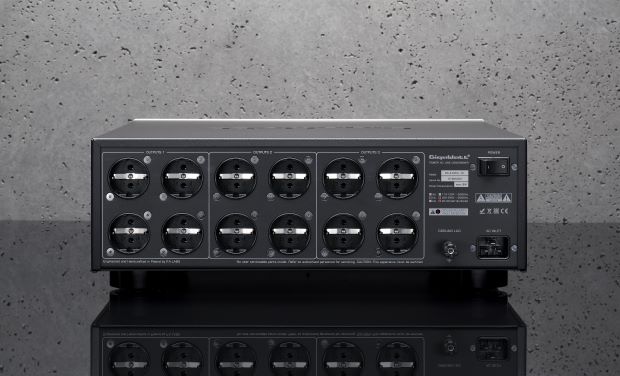 The conditioner PC-4 EVO+ is equipped with three, independent filtering branches, which supply three sections, composed of four output sockets each. Due to this solution, the kind of filtering was adjusted for the load it has, different for each type of device – digital, analog or high current devices. Autonomous passive filters allow for isolation from interference produced by the devices connected via a shared power line.

The PC-4 EVO+ is based on a novel filtering architecture, where the most advanced and uncompromised components were used. The main novelties are the anti-interference capacitors and the compensation batteries for the buffering circuits, which are manufactured by the company Miflex, according to GigaWatt specification.

In the PC-4 EVO+ an innovative, two-stage current distribution system is used, a proprietary design of our company. It is based on massive third generation distribution rails, made from polished slabs of oxygen-free copper OFHCC 10100 with 99.997% purity. The first stage allows for lossless and even distribution of voltage to each of the filtering branches. The second stage provides current directly to each pair of output sockets via bolted and clamped connections as well as cabling with conductors with 4QMM cross-section made from oxygen-free copper isolated with FEP Teflon. The star connection topology and high conductance combined with the 45 QMM cross-section of each of the rails allow for a uniform and stable power distribution regardless of the load on the individual outputs of the conditioner.

Due to the improved efficiency of the filtering circuits, they were mounted using silver solder on massive PCBs having fifteen times the amount of copper compared to standard PCBs. The dual-layer PCBs have very wide traces made from silver-plated copper, with a combined thickness of 550 micrometres. The interference is damped by filtering blocs of RLC type, built around proprietary Audio Grade capacitors and HF (High Flux) core filters.

The newest version of the PC-4 EVO+ is equipped with special capacitors – with higher capacity and more efficiency than in the lower models. Those capacitors are manufactured by a renowned and valued company on the specialist market, Miflex, according to GigaWatt specifications.

In the conditioner, there are no traditional protective elements, like thermal or blow fuses, which throttled the free flow of the current have a negative influence on the sound. The surge protection of the conditioner is provided by the starting block, which utilizes plasma spark-gaps, UltraMOV new generation varistors and an initial filter. Overload protection is provided by a two-pole hydraulic-magnetic switch from Carling Technologies, made in the USA to a special specification from GigaWatt. This element controls the amount of current flowing through the internal circuits and additionally serves as the unit’s main power switch. All those elements working together with a well-made, contemporary power grid, guarantee a complex protection against surges and overcurrent.

The internal construction of the elements of the PC-4 EVO+ conditioner allows for transferring loads up to 25A constantly (and 90A peak), of course, if the power grid can handle that. Such a big reserve is not required for the lossless power transfer from the power grid, but to have an oversized reserve of power for peak, impulse loads. The power reserve is fundamental for powering powerful power amplifiers, which load the power line to values many times over the nominal load. The main power supply socket is a professional PowerCon 32 Amp one with silver plated pins, able to transfer a stable current of 32A. The maximum load of 25A is almost three times the typical load of similar devices using the popular IEC socket.

To allow for the maximum impulse response, the PC-4 EVO+ is equipped with a double buffer circuit with Audio Grade compensation batteries, a proprietary design. The circuit increases the current output with non-linear loads, like power amplifiers, as well as eliminates the difference of power between the input and output of the conditioner. This allows for almost unlimited impulse capabilities, unheard of in other passive conditioners and not reachable for active conditioners. The impulse capabilities of the PC-4 EVO+ surpass even the values of a clean power line without any devices connected to it.

The standard equipment of PC-4EVO+ is also a DC Offset Blocker –  a circuit eliminating unwanted DC components of the power grid. This DC component is a very deteriorating phenomenon, which exists in almost all power grids. It results in the sinus wave of the alternating current become non-symmetrical (non-sinusoidal) and has a negative impact on all devices using transformers. It causes their cores to become magnetized, which increases their noise, diminishes the efficiency of power supplies and lower sound quality as a result. The DC blocker allows eliminating this phenomenon effectively, without causing any compression or any other negative influence on the sound.