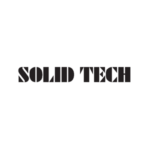 The Discs of Silence the world’s second best passive isolator?88,48% reduction at 20Hz!The Discs of Silence is our workhorse isolator as in itsHeavy- Dutyversion can effectively isolate up to 175kg (385lbs)per set of four discs. When we developed the Discs of Silence was our goal to create the most efficient and load capable isolator as possible without taking too much height in claims. It would also be height -adjustableand be adaptable to uneven loads.Enter the Discs of Silence!The Discs of Silence isolation-system consists of a cylindrically formed, sturdy and anodised Aluminum base, extension-springs, center-hub and a height-adjustablecenter-screw with a damping layer for mechanical coupling to the component.The Discs of Silence are available in 3 or 4pack.The equally simple as ingenious horizontal location of the extension-springs allows a large capacity without taking as much height in claims. When correctly loaded the operating heightis 32-35mm. Correctly adapted and loaded is the resonance frequency well below 4Hz. Ensuring isolation even in the lowest and most degrading frequencies, resulting in much higher fidelity without tonal highlighting and maskingsuch as more dynamic, cleaner transient response, wider and deeper soundstage, increased low level information, tighter bass and silkier highs.Optimized adaptation to a specific weightof each disc is obtained by adding the right number of springs, as well as the heightadjustment of the center-screw.Each disc can be configured with two, three, four or six springs depending of the amount of load. In the case of supply are three springs mounted and included and then the system can be loaded with max 45 kg when the center screw is adjusted to its top position. Additionalspring-set can be obtained and then doubled the capacity to 90 kg per set of four discs. In the case of supply of the HD version are twelve springs per disc included but only six mounted. 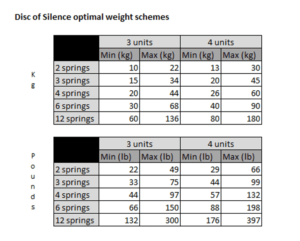